Posted on October 30, 2019 by blackwatervalleycountryside

On Tuesday 24th September the BVC Volunteers, Bernard from the BVC Trust, Rangers Sara and Andy from Basingstoke Canal Authority joined Stu and I for a rather wet day in our smallest ‘flash‘ in Wellesley Woodlands. This was part of the BVCT’s Rivers Festival Week as well as National River Week where we undertake work within the Loddon Catchment area with the Loddon Catchment Partnership.

The volunteers continued the work that had already been started by the Thursday group by continuing to clear the flash of the encroaching scrub, which mainly consists of willow and birch. They were pleased to hear they could have a fire (a rarity on Wellesley!), but less so when they discovered how wet underfoot it was in places. Nick bravely found the wettest, deepest section before anyone else could stumble into it and the group worked around the area with temporary bridges and chain gangs.

Whilst the volunteers worked at one end with hand tools, Sara and Andy worked at the other, felling trees with chainsaws. Our work helps benefit the SSSI canal as we were removing shade from the southern bank which helps let more light in for plants and invertebrates. In return we helped empty their work boat of previously cleared hazard trees from the Canal. Bernard worked tirelessly between the groups to create a Grass Snake egg laying mound as we have seen the snakes use the flash this year, as well as swimming in the canal.

We took shelter for tea and lunch breaks, though we did seem to time it for the dry breaks in the weather! 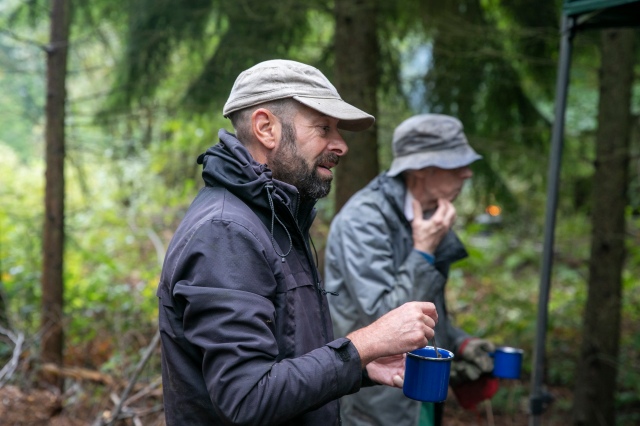 The volunteers did a fantastic job, despite the weather and deceptive conditions underfoot, making real progress in opening up the flash. Luckily for us, Rivers Week was before it got too wet. If you head down to Claycart now, our work area is underwater and would require waders to walk around in! Any volunteers?

Many thanks to Shaun, who braved the weather (and mud) to take professional photographs of the event. In return I like to think we offered smiles and a challenging photo shoot in return!

The Blackwater Valley is located on the borders of Hampshire, Surrey and Berkshire and runs for approximately 30km from the source near Aldershot, northwards to Swallowfield. At its confluence it joins the rivers Whitewater and Loddon. The Loddon eventually flows into the River Thames near Reading. Work in the Blackwater Valley is co-ordinated by the Blackwater Valley Countryside Partnership on behalf of the local authorities that border the Valley. Despite being surrounded by urban development the Valley provides an important green corridor for local residents As well as the Blackwater Valley Site of Special Scientific Interest (SSSI) and a small part of the Basingstoke Canal SSSI, three nature reserves within the Valley catchment and many other areas have been recognised for their ecological importance. The local planning authorities covering the Valley have designated 31 other areas as ‘Wildlife Sites’.
View all posts by blackwatervalleycountryside →
This entry was posted in Events, River, Volunteers, Wellesley Woodlands, Wildlife and tagged Basingstoke Canal, BVCT, BVCV, grass snake, Loddon catchment, Rivers week, Wellesley Woodlands. Bookmark the permalink.