Posted on October 30, 2019 by blackwatervalleycountryside

On Wednesday 23rd October, Ranger Jenny, Assistant Ranger Bobbie, Student Liam and I  joined 5 volunteers from the Frimley Fuel Allotments Charity to remove Parrot’s Feather (Myriophyllum aquaticum) from one of the ponds.

Parrot’s Feather is an invasive species that originates from Southern and Central America. The stems and leaves of the plant can grow up to a foot above the water surface. It can cover large areas, smothering and blocking out light for any of our native species to flourish. The Blackwater Valley team are very used to this species, having previously removed it from Darby Green Pond.

Most of the group spent the day in the water collecting the plant, whilst the rest of us dragged it away from the pond. During this time, Bobbie caught a small fish and one of the volunteers found a palmate newt. I would like to say that I assisted the removal of the Parrot’s Feather in the pond, but unfortunately after a few minutes in the water, it was soon realised that my waders were leaking! 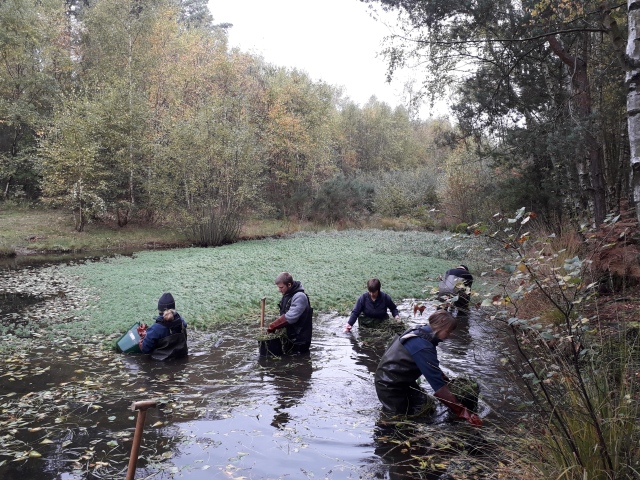 The Blackwater Valley is located on the borders of Hampshire, Surrey and Berkshire and runs for approximately 30km from the source near Aldershot, northwards to Swallowfield. At its confluence it joins the rivers Whitewater and Loddon. The Loddon eventually flows into the River Thames near Reading. Work in the Blackwater Valley is co-ordinated by the Blackwater Valley Countryside Partnership on behalf of the local authorities that border the Valley. Despite being surrounded by urban development the Valley provides an important green corridor for local residents As well as the Blackwater Valley Site of Special Scientific Interest (SSSI) and a small part of the Basingstoke Canal SSSI, three nature reserves within the Valley catchment and many other areas have been recognised for their ecological importance. The local planning authorities covering the Valley have designated 31 other areas as ‘Wildlife Sites’.
View all posts by blackwatervalleycountryside →
This entry was posted in Conservation, Minor Sites, Volunteers, Wildlife and tagged Frimley Fuel Allotments, Newt, Parrot's Feather. Bookmark the permalink.