Posted on January 17, 2018 by blackwatervalleycountryside

Yesterday Jenny, Sam and I completed the hedge-laying we started on Sunday at Moor Green lakes, with a huge turnout of 39 volunteers over the two tasks. We worked on the hedge between the footpath and bridleway down towards the Blackwater River, laying a total of 28m of living hedge.

We extended the section from last year, opening up access and light to the footpath and bridleway, whilst providing a dense thorny living hedge for wildlife. It proved quite a challenge working around the first generation pleachers which were laid 15 years ago, and also laying some pleachers backwards to fill in the gaps. If you’d like to find out more about the process and terminology of laying a hedge, like what a snot is, then take a look at last years hedge-laying post.

The Tuesday hedging volunteers by the finished hedge

The volunteers got stuck into thinning the hedge and pleaching the trees, to lay them over whilst still connected to the stump. The volunteers used billhooks and hatchets, whilst we deployed the chainsaw for some of the more tricky larger trees.

The hazel stakes and binders were harvested locally from Moor Green Lakes and Gerry’s Copse. Here Mike and Jon tap in stakes to tie the hedge together, using an orange hazel mallet.

Tamping in the stakes

Any loose branches are woven back into the hedge, before adding the binders then hammering in and cutting off the stakes.

The halfway hedge with stakes loosely tamped in

The transformation looks quite dramatic. Most of the volunteer tasks at Moor Green Lakes are hidden away, so it’s very rewarding to work on a visible section of the reserve. The volunteers efforts proved very popular with visitors, attracting 26 compliments.

The overgrown tree line before laying 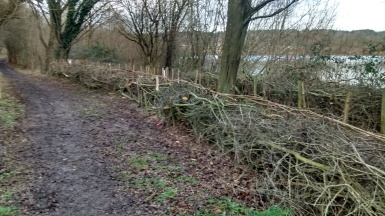 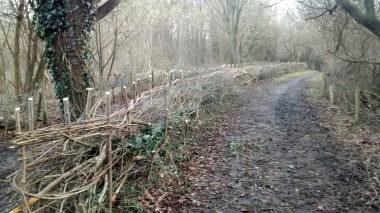 The completed hedge looking towards the river

With our bumper volunteer turnout, we also removed 150m of redundant rabbit fencing, replaced a broken fence rail in the car park, created a dead hedge by Manor Farm and cut back over 1km of footpath.

Thank you to everyone for all your hard work.

The Blackwater Valley is located on the borders of Hampshire, Surrey and Berkshire and runs for approximately 30km from the source near Aldershot, northwards to Swallowfield. At its confluence it joins the rivers Whitewater and Loddon. The Loddon eventually flows into the River Thames near Reading. Work in the Blackwater Valley is co-ordinated by the Blackwater Valley Countryside Partnership on behalf of the local authorities that border the Valley. Despite being surrounded by urban development the Valley provides an important green corridor for local residents As well as the Blackwater Valley Site of Special Scientific Interest (SSSI) and a small part of the Basingstoke Canal SSSI, three nature reserves within the Valley catchment and many other areas have been recognised for their ecological importance. The local planning authorities covering the Valley have designated 31 other areas as ‘Wildlife Sites’.
View all posts by blackwatervalleycountryside →
This entry was posted in Access, Conservation, Moor Green Lakes, River, Volunteers and tagged BV path, chainsaw, hedge laying, Moor Green Lakes, Tuesday Volunteers, Volunteers. Bookmark the permalink.