Posted on July 20, 2017 by blackwatervalleycountryside

As the summer weather appeared so did the Himalayan Balsam so the Moor Green Lake volunteers have scheduled a few extra work parties to clear this invasive plant. In our first work party in June we concentrated on clearing the bank of the river Blackwater next to the reserve in the hope that it would limit the dense balsam spreading from the southern bank.

The volunteers quickly cleared the bank of the river next to the reserve and even some of the bigger clumps downstream.

Some of the larger balsam clumps cleared by the volunteers.

After stacking the balsam away from the river, we felt very happy with the riverside clearance by the end of the day. We also cleared some areas noticed inside the reserve but unfortunately discovered some larger clumps of small balsam that we had to leave for another time. Thanks very much to Steve, Paul, Linda, Angus, Marie, Gerry and Melvyn for your valiant efforts at short notice.

July brings the ragwort into flower and this is poisonous to the cattle that are grazed on the reserve. Jenny, Bobbie and Sam from BVCP brought trailer and lazydogs (special forks for pulling ragwort) and with a good number of volunteers we quickly cleared the ragwort from around Colnbrook lake.  This was a really hot day and with efforts from previous years greatly reducing the amount of ragwort on site there was time to enjoy the many butterflies, insects and birds on the site.  See Bobbies excellent blog here.

The following Sunday we scheduled another work party to clear the ragwort from Grove Lake and to try and get rid of the remaining balsam from the reserve. As on the earlier session there was very little ragwort which is really good news.  There were however lots of damselflies and other insects rising up from the long grass and we even saw a pair of buzzards circling low over the lakes. 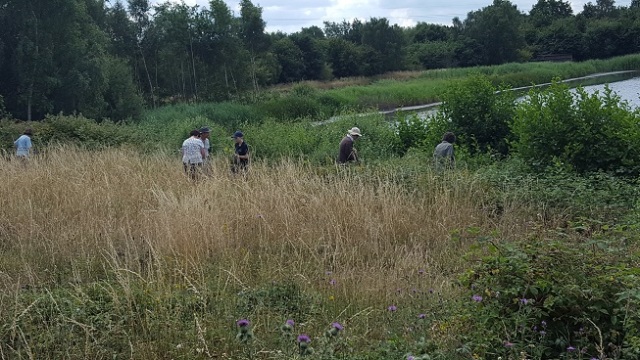 By late coffee break the volunteers had removed all visible ragwort from around Grove Lake so we should now be ready for the cattle to come back on the reserve. We then set upon the dreaded balsam that was left in the reserve.  This was a horrible task in amongst the nettles and brambles but we could at least see the flowers now and it did pull up easily when you could get to it.

By the end of the day we had cleared much of the balsam from around Grove Lake. We will have to attack this area again next year but the situation has been greatly improved thanks to all the volunteer efforts. Many thanks to Jenny, Bobbie and Sam (from BVCP), Angus and Helen, Mary, Colin and Julia and all the other volunteers who have helped this summer and we look forward to seeing you again (and anyone else who fancies a bit of fresh air and fun) when we start our regular work parties in September.

The Blackwater Valley is located on the borders of Hampshire, Surrey and Berkshire and runs for approximately 30km from the source near Aldershot, northwards to Swallowfield. At its confluence it joins the rivers Whitewater and Loddon. The Loddon eventually flows into the River Thames near Reading. Work in the Blackwater Valley is co-ordinated by the Blackwater Valley Countryside Partnership on behalf of the local authorities that border the Valley. Despite being surrounded by urban development the Valley provides an important green corridor for local residents As well as the Blackwater Valley Site of Special Scientific Interest (SSSI) and a small part of the Basingstoke Canal SSSI, three nature reserves within the Valley catchment and many other areas have been recognised for their ecological importance. The local planning authorities covering the Valley have designated 31 other areas as ‘Wildlife Sites’.
View all posts by blackwatervalleycountryside →
This entry was posted in Conservation, Moor Green Lakes, Volunteers and tagged Himalayan Balsalm, ragwort. Bookmark the permalink.