Posted on May 17, 2017 by blackwatervalleycountryside

The live capture traps are designed not to harm. They contain tasty treats and are placed in a way that they should stay dry.

On Friday Bernard set the 45 traps along the Northern bank of Colebrook Lake North and caught seven animals.  Six of these were Wood Mice, three of each sex, and one a Common Shrew!  All the Wood Mice were in fine condition, one was pregnant and the others were just coming into breeding condition. 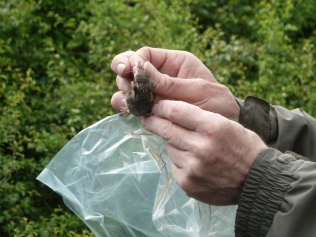 Though the visitors (15) outnumbered the trapped animals, most likely due to the wet weather, it was still a pleasant morning to be discovering our smaller mammals.

A special thanks from Bernard to Mary, Grant and Chris who helped setting up and to the other people who came and helped on the Saturday.

The Blackwater Valley is located on the borders of Hampshire, Surrey and Berkshire and runs for approximately 30km from the source near Aldershot, northwards to Swallowfield. At its confluence it joins the rivers Whitewater and Loddon. The Loddon eventually flows into the River Thames near Reading. Work in the Blackwater Valley is co-ordinated by the Blackwater Valley Countryside Partnership on behalf of the local authorities that border the Valley. Despite being surrounded by urban development the Valley provides an important green corridor for local residents As well as the Blackwater Valley Site of Special Scientific Interest (SSSI) and a small part of the Basingstoke Canal SSSI, three nature reserves within the Valley catchment and many other areas have been recognised for their ecological importance. The local planning authorities covering the Valley have designated 31 other areas as ‘Wildlife Sites’.
View all posts by blackwatervalleycountryside →
This entry was posted in Conservation, Education, Events, Moor Green Lakes, Volunteers and tagged BlackwaterValleyCountryside, CommonShrew, WoodMice. Bookmark the permalink.