Posted on March 25, 2017 by blackwatervalleycountryside

On a rainy Sunday 12th March we had the last work party of the winter led by Volunteer Leader Jon. In spite of the rain we had a good turnout of 11 and split into two groups. The first group were cutting back field maple and hazel to open up the light into the ochreous stream that runs through the lakes and through Long Island. This stream has rust coloured mud at the bottom due to the algae that thrives on the acidic water coming from Finchampstead Ridges. 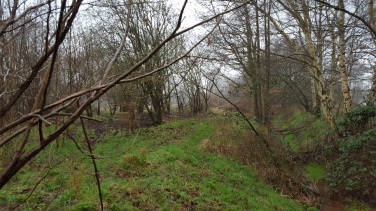 The stream before work started

By coffee break it was still raining but hot drinks and biscuits cheered everyone up and with the promise of a bonfire everyone got back to work.

Meanwhile the second group had been building homes for stag beetles – otherwise known as stumperies. This is part of a project to build 50 stumperies in the Blackwater Valley to reverse the declining numbers of stag beetles. Rotting logs are buried about two feet into the ground providing the food and environment for the stag beetle larvae, while the part out of the ground encourages other insects and fungus.   Three stumperies were built during the day, two near the river where they can be seen from the path and one in the meadow near the ochreous stream. 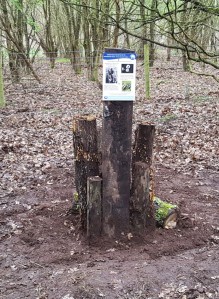 The first group pollarded the larger trees and coppiced the dense hazel near the existing meadow which opened up the stream to the sunlight. With a good bonfire going in spite of the rain, all the brash was cleared and burnt leaving a nice clear site – including a stumpery. 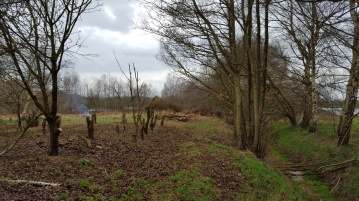 The stream after the tree cutting

A big thank you to all our volunteers for all the hard work you have put in over the winter. We hope you enjoyed yourselves and will return when we restart our Sunday work parties in September after the nesting season is over.

The Blackwater Valley is located on the borders of Hampshire, Surrey and Berkshire and runs for approximately 30km from the source near Aldershot, northwards to Swallowfield. At its confluence it joins the rivers Whitewater and Loddon. The Loddon eventually flows into the River Thames near Reading. Work in the Blackwater Valley is co-ordinated by the Blackwater Valley Countryside Partnership on behalf of the local authorities that border the Valley. Despite being surrounded by urban development the Valley provides an important green corridor for local residents As well as the Blackwater Valley Site of Special Scientific Interest (SSSI) and a small part of the Basingstoke Canal SSSI, three nature reserves within the Valley catchment and many other areas have been recognised for their ecological importance. The local planning authorities covering the Valley have designated 31 other areas as ‘Wildlife Sites’.
View all posts by blackwatervalleycountryside →
This entry was posted in Conservation, Moor Green Lakes, Volunteers and tagged Moor Green Lakes, Stumpery, Volunteers. Bookmark the permalink.