Posted on February 24, 2017 by blackwatervalleycountryside

On Sunday 12th February we had our penultimate work party of the winter clearing scrub, birch and willow from around the acidic scrape near Grove Hide. With an excellent turnout of 19, volunteer leader Jane got us all well organised to attack the scrub at the end of the scrape.

Volunteers starting to cut back the scrub

With so much brash and a reluctant fire, Tony took some of the volunteers and extended the dead hedge alongside the path round Horseshoe lake. This looked really nice at the end and gave us a productive task while the fire started. 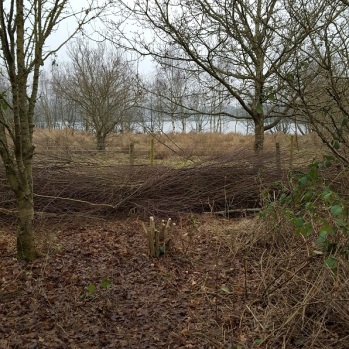 As well as this, Bob was clearing scrub from around the hide to improve the views and Andy and a team were cutting back the birch and willow alongside Grove Lake. Some of the bigger birches were felled into the water to provide low level perches for ducks and other birds.

By the afternoon the fire was burning well and volunteers were clearing the bramble and remaining thinner birch. We even saw a vole (or was it a mouse?) scurrying across to the logpile. There are still a few birches to come down next year but the results of the day were very impressive. 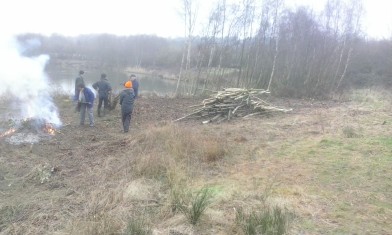 Scrub cleared at the end of the day

A big thank you to all our volunteers for all the hard work you have put in. We hope you enjoyed yourselves and will return for our last Sunday task on 12th March where we will open up some light into the “ochreous” stream and hopefully build a “stumpery” for stag beetles.

The Blackwater Valley is located on the borders of Hampshire, Surrey and Berkshire and runs for approximately 30km from the source near Aldershot, northwards to Swallowfield. At its confluence it joins the rivers Whitewater and Loddon. The Loddon eventually flows into the River Thames near Reading. Work in the Blackwater Valley is co-ordinated by the Blackwater Valley Countryside Partnership on behalf of the local authorities that border the Valley. Despite being surrounded by urban development the Valley provides an important green corridor for local residents As well as the Blackwater Valley Site of Special Scientific Interest (SSSI) and a small part of the Basingstoke Canal SSSI, three nature reserves within the Valley catchment and many other areas have been recognised for their ecological importance. The local planning authorities covering the Valley have designated 31 other areas as ‘Wildlife Sites’.
View all posts by blackwatervalleycountryside →
This entry was posted in Conservation, Moor Green Lakes, Volunteers and tagged Moor Green Lakes, Volunteers. Bookmark the permalink.