Posted on December 18, 2016 by blackwatervalleycountryside

Last Sunday the Moor Green Lakes volunteers had their last work party of 2016 – what a good turnout and result!

After herding the Belted Galloways away from the pontoon we set up camp on the island and Jon ran through what we hoped to do – Plover Island is a daunting task that gets revisited each year. 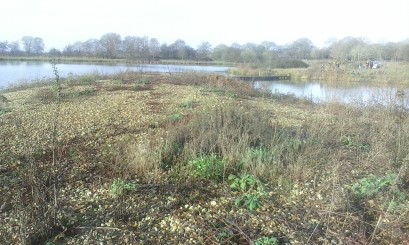 View west towards pontoon bridge at start of the day

The Murfitt and McDonald families were soon getting through the willow at the far end of the island and with the rest of us spread along the shore facing the hide, the shingle started to appear from out of the bramble and weeds. 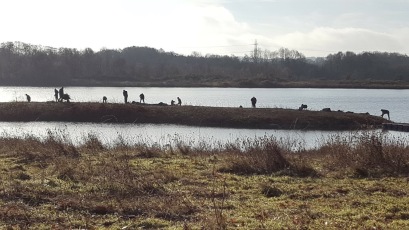 By lunchtime the near end was clear and new volunteer Simon was getting to grips with some of the heavy grass that we don’t usually get to.  With Andy doing the heavy lifting and barrowing off the island, by the end of the day Plover Island had never looked so clear.  Hopefully we may see some nesting birds in the spring.

Many thanks to all the volunteers that turned up to help – its really made a huge difference. If you’d like to come along and lend a hand, the next Sunday task at Moor Green Lakes will be clearing Tern Island on the 8th January, meeting at 10:30am in the Lower Sandhurst Road Car Park.

The Blackwater Valley is located on the borders of Hampshire, Surrey and Berkshire and runs for approximately 30km from the source near Aldershot, northwards to Swallowfield. At its confluence it joins the rivers Whitewater and Loddon. The Loddon eventually flows into the River Thames near Reading. Work in the Blackwater Valley is co-ordinated by the Blackwater Valley Countryside Partnership on behalf of the local authorities that border the Valley. Despite being surrounded by urban development the Valley provides an important green corridor for local residents As well as the Blackwater Valley Site of Special Scientific Interest (SSSI) and a small part of the Basingstoke Canal SSSI, three nature reserves within the Valley catchment and many other areas have been recognised for their ecological importance. The local planning authorities covering the Valley have designated 31 other areas as ‘Wildlife Sites’.
View all posts by blackwatervalleycountryside →
This entry was posted in Moor Green Lakes, Volunteers, Wildlife and tagged island, Moor Green Lakes, Volunteers. Bookmark the permalink.