Posted on September 29, 2016 by blackwatervalleycountryside

Earlier this week Andrew, John and I went to Runfold to do some finishing touches after the Surrey Hedge Layers visit a few weeks ago. In front of our beautiful newly laid hedge was some old rabbit fencing which we removed with some difficulty to expose the hedge. We also chipped some left over brash to clear the path which now looks great. Again a big thank you to the Surrey Hedge laying group. 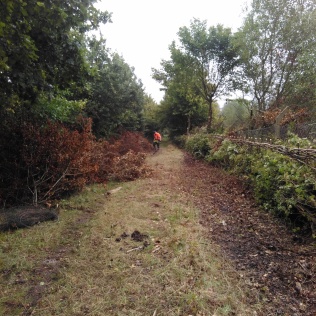 On our way out we also spotted this pretty purple fungi which we believe to be Amethyst deceiver. 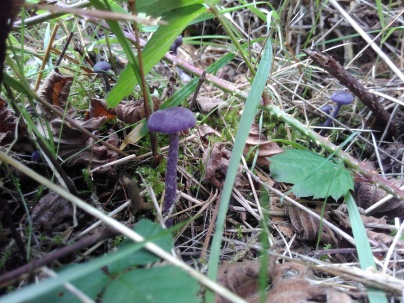 The Blackwater Valley is located on the borders of Hampshire, Surrey and Berkshire and runs for approximately 30km from the source near Aldershot, northwards to Swallowfield. At its confluence it joins the rivers Whitewater and Loddon. The Loddon eventually flows into the River Thames near Reading. Work in the Blackwater Valley is co-ordinated by the Blackwater Valley Countryside Partnership on behalf of the local authorities that border the Valley. Despite being surrounded by urban development the Valley provides an important green corridor for local residents As well as the Blackwater Valley Site of Special Scientific Interest (SSSI) and a small part of the Basingstoke Canal SSSI, three nature reserves within the Valley catchment and many other areas have been recognised for their ecological importance. The local planning authorities covering the Valley have designated 31 other areas as ‘Wildlife Sites’.
View all posts by blackwatervalleycountryside →
This entry was posted in A331 & A31 Green Corridor, Conservation, Wildlife and tagged chipper, fencing, Fungi, hedge laying, Runfold. Bookmark the permalink.