Posted on March 17, 2016 by blackwatervalleycountryside

On Tuesday Laura and I led a joint task with the BVC Trust planting trees and reeds at Grants Moor, which lies just east of Farnborough North Station. The three ponds to the south act as a series of balancing ponds which draw up A331 run-off water, to filter pollutants and provide water storage to reduce the peak flow of water into the river during floods. The first two silted ponds were recently re-excavated by Highways, which has left completely bare banks.

For our project Bernard and I led the volunteers planting 400 trees to re-establish a block of scrub screening on the middle pond and provide nesting bird habitat.

Planting the scrub to screen the road by middle lake

Meanwhile Laura and Colin headed over to Frimley Hatches to harvest Phragmities australis (common reed) tubers from the reedbed. These were transplanted into net enclosures on the southern lake at Grants Moor, to help reduce duck and geese predation whilst we establish the new reedbed. The ten enclosures used recycled netting and stakes from Moor Green Lakes. When it’s a tad warmer in May we’ll also plant in Phragmities australis plugs to supplement the tubers. Thanks to everyone for a fantastic productive task. 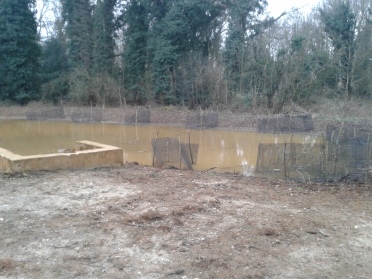 The Blackwater Valley is located on the borders of Hampshire, Surrey and Berkshire and runs for approximately 30km from the source near Aldershot, northwards to Swallowfield. At its confluence it joins the rivers Whitewater and Loddon. The Loddon eventually flows into the River Thames near Reading. Work in the Blackwater Valley is co-ordinated by the Blackwater Valley Countryside Partnership on behalf of the local authorities that border the Valley. Despite being surrounded by urban development the Valley provides an important green corridor for local residents As well as the Blackwater Valley Site of Special Scientific Interest (SSSI) and a small part of the Basingstoke Canal SSSI, three nature reserves within the Valley catchment and many other areas have been recognised for their ecological importance. The local planning authorities covering the Valley have designated 31 other areas as ‘Wildlife Sites’.
View all posts by blackwatervalleycountryside →
This entry was posted in Conservation, Grant's Moor, Volunteers and tagged reedbed, trees, Trust, Tuesday Volunteers, Volunteers. Bookmark the permalink.

1 Response to Tree and reed planting project at Grants Moor