Posted on January 22, 2016 by blackwatervalleycountryside

I’m just back after a fun and productive day at Moor Green Lakes, where Chris, Tony, John, Alan and Adam Bates gave both of the tern nesting rafts a spruce up. The rafts work well as a floating nest platform away from predators such as mink, but over the last few years weeds have obscured the chicks.

Arriving on site we found an unexpected problem for our mild winter, half the lake was frozen over, so our mighty 8ft boat became the smallest ice-breaker in history. Each raft was towed back where we employed rails, rollers and brute force to push them ashore. The muddy weedy gravel was replaced with new clean gravel and the transparent side panels washed down. Also we added ramps that Roger made so the newly fledged chicks can get out easier.  Thanks to everyone for all their hard work getting both tern rafts restored and back on Colebrook Lake North. 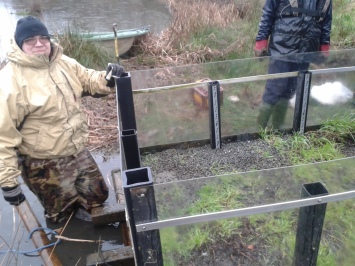 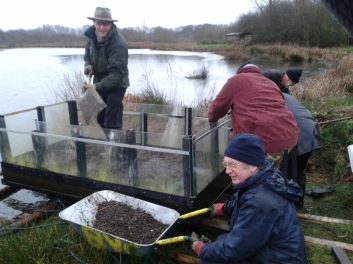 The Blackwater Valley is located on the borders of Hampshire, Surrey and Berkshire and runs for approximately 30km from the source near Aldershot, northwards to Swallowfield. At its confluence it joins the rivers Whitewater and Loddon. The Loddon eventually flows into the River Thames near Reading. Work in the Blackwater Valley is co-ordinated by the Blackwater Valley Countryside Partnership on behalf of the local authorities that border the Valley. Despite being surrounded by urban development the Valley provides an important green corridor for local residents As well as the Blackwater Valley Site of Special Scientific Interest (SSSI) and a small part of the Basingstoke Canal SSSI, three nature reserves within the Valley catchment and many other areas have been recognised for their ecological importance. The local planning authorities covering the Valley have designated 31 other areas as ‘Wildlife Sites’.
View all posts by blackwatervalleycountryside →
This entry was posted in Conservation, Moor Green Lakes, Volunteers, Wildlife and tagged Moor Green Lakes, Student, students, Volunteers, wildlife. Bookmark the permalink.